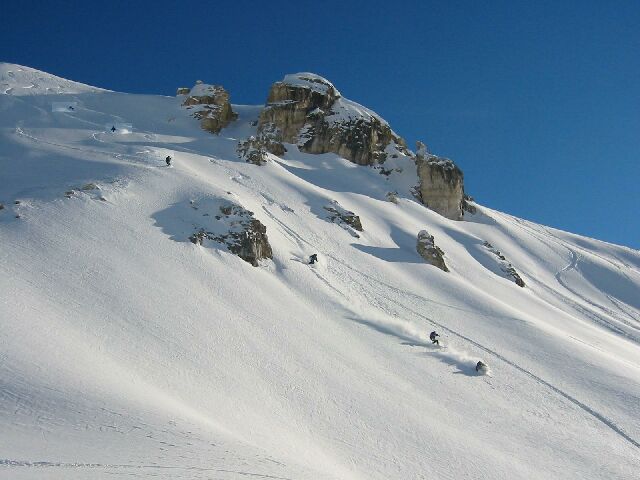 In the shadow of the Matterhorn, Breuil-Cervinia Valtournenche is one half of the ski area linked with Zermatt, just over the boarder into Switzerland. Breuil-Cervinia Valtournenche is an intermediate skiers paradise with kilometre after kilometre of wide open piste with an incredible vertical drop of 1,956 m (Plateau Rosà 3,480m to Valtournenche 1,524 m). Beginners will be equally pleased with a host of gentle pistes. Experts, however, may become slightly bored and forget that they are below one of Europe's major north faces. Experts may feel more at home just over the border in Zermatt. There are two snow parks at Breuil-Cervinia Valtournenche: the Plan Maison area off the Fornet chairlift and at Zermatt, off the Furggsattel chairlift. Extensive snow making covers 53km of pistes (35%). The nearest airport is Turin Caselle (118km) but both of Milan's airports are also close enough to be good alternatives (Milan Malpensa 160km, Milan Linate 180km).

Valtournenche is a gem! So much prettier and authentic than Cervinia. We skied 1st week of April and could still ski right down to the Valtournenche. Great views and high, snowsure slopes. Access to the Cervinia side was open and didn't take too long.