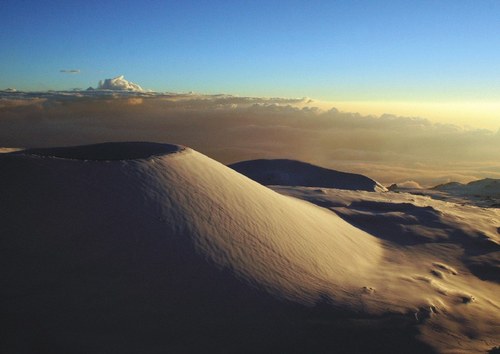 Mauna Kea, a dormant volcano, is one of the highest island mountains in the world. It is located on the main island of Hawaii along with its slightly smaller neighboring mountain, Mauna Loa (13,667 ft.). If Mauna Kea's height is measured from its base (18,000 feet below sea level), it surpasses even Mount Everest, and is the world's highest mountain (31,796 ft.). Although there is no historical record of Mauna Kea's eruption, geologic evidence suggests that the volcano last erupted around 1650, and eruptions are present in traditional Hawaiian folklore. According to legend, Mauna Kea and Mauna Loa were the domains of two opposing goddesses, Poliahu and Pele, respectively. Earthquakes and volcanic eruptions were produced from their violent rivalry.

Maunakea is not a ski resort, as such it does not offer the amenities of a ski resort. There is no public transportation to/from the summit, no food service, and public restrooms are very limited. Mobile phone communications are extremely limited and emergency services are over 1 hour away. High altitude travel is known to present health risks and snow play (skiing, sledding, etc.) is at the person’s own risk. Commercial skiing tours are prohibited. The ski patrol no longer operates. As the mountain is culturally significant and the cinder cones are wēkiu bug habitat, an endemic species found only on
Maunakea cinder cones, the University of Hawaiʻi (the land manager) does not promote skiing. For more information, please visit our website: malamamaunakea.org